Which is the predominant genre consumption by country?

The young adult’s report was released in early November and contains a detailed country by country analysis of TV consumption of young adults, as well as a cross-country analysis. A study which highlights the TV viewing habits of 15-34 year olds within the audio-visual landscape of ten countries (Denmark, France, Germany, Italy, Japan, Netherlands, Spain, Sweden, United Kingdom and the USA).

To gain insights into young adults’ TV viewing habits, it is interesting to look at how young adults’ TV time is shared between the three genres (excluding sport) and if young adults’ consumption pattern is very different from the rest of the audience.

The chart below shows the aggregated results over ten countries studied on the six main channels among young adults, covering the 06:00-25:00 timeslot.

From this chart, it is clear that young adults have a rather balanced TV consumption. However, fiction is the most watched genre by young adults. This genre is highly attractive for young people as it includes many popular series subgenres. It is also noteworthy that the factual genre consumption is 1-point higher than entertainment. In Italy, the Netherlands and Japan, the factual genre is boosted by the significant success of docu-soaps. Young adults are fond of this new type of programme, blending factual and entertainment.

The report also reveals that entertainment is relatively overconsumed, as it only represents 25% of the hours of programming, but 32% of the young adults’ TV consumption. It underlines the fact that entertainment programmes are generally strong performers.

Furthermore, entertainment and fiction are consumed more by young adults than by total individuals.

The below map shows us a genre consumption by country.

Fiction: the predominance across five countries 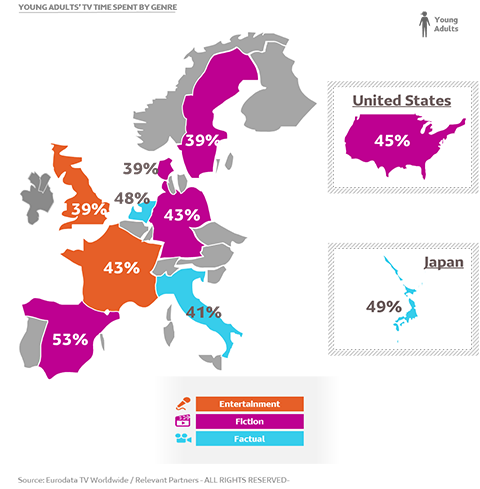 It reveals immediately the predominance of fiction across five studied countries (Sweden, Denmark, Germany, Spain and the United States). Entertainment is most presented in France and the United Kingdom, the two countries which have also the largest volume of entertainment in the programming compared to the other countries (38% and 35% respectively). As this genre is usually successful with young adults. Finally, factual dominates in three countries (Italy, Japan and the Netherlands). As seen before, in those countries, there is a fine line between entertainment and factual which could explain such a fondness of these programmes.

More facts and figures of the young adults’ TV consumption can be found in the Young Adults report.

Most successful scripted series in the online screens