In the first 6 months of 2017, the TV consumption of children in the 5 main markets achieved 1 hour and 46 minutes (- 6 min vs 2016). Therefore, Kids’ TV players had to adapt their strategy to re-catch the attention of children.

Evolution of the daily viewing time across countries: contrasting situations

Cultural consumption habits can lead to huge gaps between countries regarding the daily viewing time. Italy remains the country with the highest DVT (2:39) whereas Germany still has the lowest one (1:15).

In terms of viewership, disparities were found in the viewing usage among children, which varies from one country to another. In Italy and UK, younger children (between 4 and 9 years old) boost the viewership while in Germany, it is a different picture as the children aged 3 to 5 are by far the least involved in TV watching.

Italy and Spain saw their children’s channels market shares decrease vs 2016 but on the other hand France, UK and Germany welcomed better results. Generally, group’s good performances are supported by one of their channel as the French channel Gulli part of Lagardère Active which recorded the higher market share in France.

Local players owed their success to preschoolers. Indeed, few children’s channel experienced massive growth. Cbeebies in the UK, Rai Yoyo in Italy, which are preschoolers’ specialists, are by far overhanging other children’s channels increases among preschoolers by gaining more than 4 points of audience share vs the same period in 2016.

Though, some generalists channel who broadcast solid children’s block are holding up to as France 5 (FR) and Channel 5 (UK).

Across the 5 countries, animated series dominated the rankings, taking over 73%. This trend is confirming in France where almost all the most popular programmes by Children aged 4-14 are the genre. Entertainment, educational and game shows were the second most watched genres with a special mention for Germany with 35% of the top programmes.

Among the best performing programmes, 17% of them were launched on their channel for the first time in the first half of 2017. Spain and Italy are the ones who bet the most on new shows in their countries (Winston Steinburger & Sir Dudley Ding Dong - Spain / Minnie’s Bow Toons – Italy) in contrast with Germany where only two new shows are ranked into the top titles.

8 programmes have succeeded in attracting a large part of the children’s audience in several countries such as the long-running British series Ben & Holly’s Little Kingdom which appears in the best series top in 4 countries.

Considering the total market ranking as well as the best performing programmes per channel, in the five main European markets studied, 67% of the series were not produced in the country they were broadcast in. 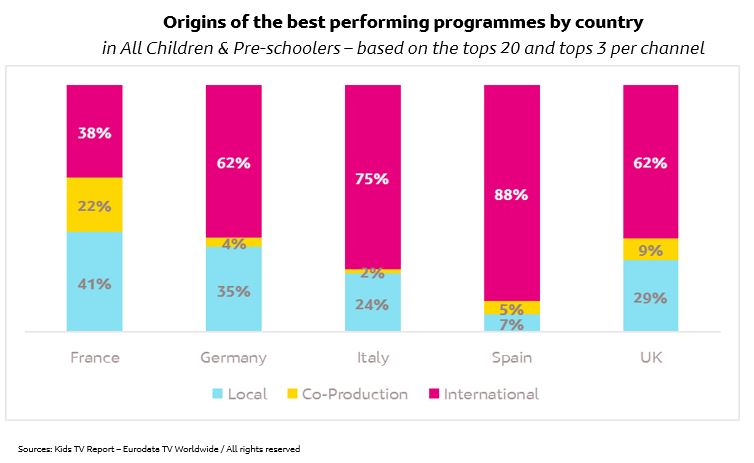 According to the first results of 4-Screen measurement among children in France, TV consumption of online screens was mainly time shifted viewing (86%) and not live. This trend applies also for the rest of the population but stays higher for Children’s programmes.
In the Netherlands, where results have been available since 2016, the tablet is the most successful screen among children aged 6 - 12 years old, with 56% of the TV consumption on the online screen.

All the facts and figures of these programmes and much more can be found in the Kids TV Report, vol 1 2017. The report was released in September 2017.

Young adults are still fans of TV content, which they watch in their own way